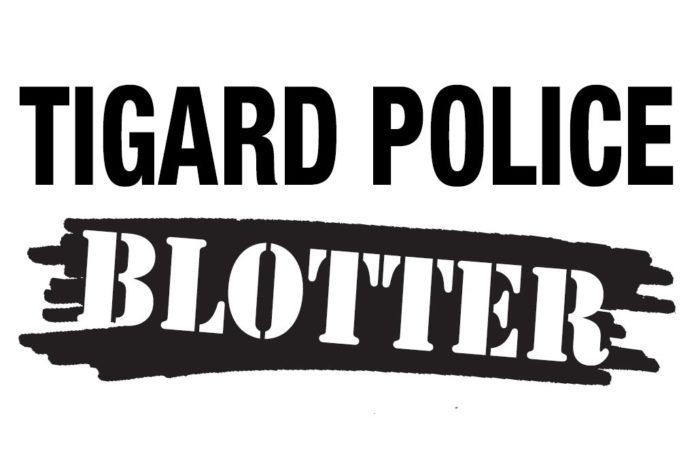 This information is provided by the Tigard Police Department and represents a partial log of calls received by the department last month. The department’s non-emergency phone number is 503-629-0111. The community tip line can be reached at 503-718-COPS.

May 1:  3:46 p.m. – An out-of-state caller said they had been contacted multiple times by someone claiming to be a Tigard detective. The caller was advised that it was likely a scam.

4:06 p.m. – A pair of juveniles were reportedly smoking something – possibly marijuana – in the courtyard at Our Redeemer Lutheran Church on Benish Street. The kids were cooperative when asked to leave.

6:48 p.m. – A man in his 20s with a skateboard was yelling and being belligerent in the area of SW 72nd Avenue and SW Pacific Highway.

12:59 p.m. – Someone reported a lost or stolen pistol. The weapon hadn’t been seen for a year or two.

3:51 p.m. – A woman was refusing to get off of a TriMet bus in the 9400 block of SW Washington Square Road. She was being loud and taking off her clothes.

6:33 p.m. – A person calling from an apartment complex said their upstairs neighbor was destroying their potted plants and almost broke a pot. The argument continued while the caller was on the phone, and the neighbor ultimately broke the pot. The suspect was cited for criminal mischief and released.

May 3:  12:43 p.m. – A woman said she thought she was being stalked by an unknown man who knows details about her routine.

6:29 p.m. – A caller reported that a man was smoking marijuana in front of their house in the area of SW Hall Boulevard and SW Joelle Court, which bothers the caller.

May 4:  8:03 a.m. – A caller reported that someone has been trying to open accounts using their information.

10:30 a.m. – A woman, said to be intoxicated, was screaming in front of a store in the 11000 block of SW Pacific Highway. Later, she was reportedly lying down behind a trash bin.

1:20 p.m. – A man was reportedly laying on the sidewalk in the 11000 block of SW Pacific Highway. Then he stood up and relieved himself.

2:34 p.m. – A caller said he thought his neighbor was breeding dogs without a business license. The caller said there was an ongoing issue with four aggressive cattle dogs roaming the streets.

3:22 p.m. – A woman was reportedly eating in the lobby of a McDonald’s restaurant, despite onsite consumption of food and drinks is prohibited due to COVID-19.

6:16 p.m. – A man and woman were found to be living in Cook park for the last two months. Police explained park rules to them.

May 5:  9:46 a.m. – A woman was screaming at people inside the post office on Main Street and refusing to leave when asked. Once she did exit, she was contacted by police and “walked off, annoyed.”

2:38 p.m. – A caller reported ordering something on Facebook marketplace and being sent a fraudulent item, resulting in money loss.

6:57 p.m. – A man reported that a truck cut him off while driving in the area SW Pacific Highway and SW Durham Road. The caller honked and flashed his middle finger. Then, he was challenged to a fight as another car tried to block him in. The caller said he feels like it was a set up.

10:27 p.m. – A man was refusing to leave a restaurant on SW Pacific Highway after being inside for more than two hours and making a mess. He also reportedly defecated on the sidewalk in front.

May 6:  10:13 a.m. – Two off-leash dogs were reportedly trying to attack people in the area of SW Fern Street and SW Ascension Drive. Police determined that the dogs were friendly; they had gotten out and were exploring the area.

2:22 p.m. – A caller reported suspicious activity at an apartment complex: multiple guests had been in and out of a unit throughout the day, each staying just three to eight minutes.

2:42 p.m. – There is an ongoing issue with a transient man defecating on the Embassy Suites property.

7:04 p.m. – A caller reported seeing people on an ATV at Dirksen Nature Park and believed it was a violation. It turns out that it was a groundskeeper raking the softball field.

11:05 p.m. – An “out-of-breath” caller reported that a resident in a group home keeps assaulting someone.

8:13 p.m. – There is an ongoing issue with people riding dirt bikes near new construction in the area of SW 165th Avenue and SW Sunshine Coast Street.

8:31 p.m. – A caller reported that a man wearing a mask rang their doorbell. The caller had Ring video footage of the incident. The caller later said they thought the person at the door was a neighbor.

10:16 p.m. – A caller said they made contact with someone on a dating app and exchanged pictures. The person is now demanding money.

May 8:  12:16 p.m. – A house on Greenburg Road was egged overnight and raw chicken was left in front of the house.

1:31 p.m. – A caller requested help rescuing ducklings that were stuck in a storm drain.

May 9:  7:25 a.m. – An intoxicated man was stumbling down the street, unable to figure out how to get home. Police provided him with a ride.

8:24 p.m. – A caller said her son grabbed two knives and was threatening her and her husband. The 911 call prompted the son to put the knives away, and he was cooperative when police arrived.

May 10:  6:18 p.m. – A caller reported that a person carrying a sleeping bag had just exited a vacant house that is for sale. Police located the subject and warned of a trespass order.

11:30 p.m. – A driver was arrested for DUII and reckless driving after they were observed swerving on northbound Highway 217.

May 11:  3:48 a.m. – An unknown person reportedly threw a tire iron and hit someone in the area of SW 72nd Avenue and SW Pacific Highway.

10:45 – A caller said that someone was squatting in a vacant building on SW Main Street.

6:04 p.m. – A man was reportedly in the bathroom stall at a restaurant for 20 minutes and refusing to come out. There were needles on the floor. The man eventually left.

1:33 p.m. – A caller said that someone had twice dumped roofing nails in his driveway.

1:35 p.m. – A caller said that they got tangled up in a Facebook Messenger scam involving provocative photos and threats that they will be shared on the internet unless a payment is made.

May 13: 4:18 a.m. – Someone awoke in their home to what sounded like someone inside the house. There was a cat loose in the house.

11:24 a.m. – Two men were reportedly in the Davidson’s Restaurant parking lot selling face masks for $10 each. The caller said he thought it was a case of price gouging.

11:37 a.m. – A man reportedly pulled a gun on a caller after a traffic altercation in the 7500 block of Dartmouth Street.

May 15: 10:20 a.m. – A woman on foot was in a fast food drive-thru, refusing to leave. She became aggressive when the store refused to give her free food.

10:42 a.m. – A caller said that a woman who smells bad and had sores all over was sitting on her back porch.

8:33 p.m. – A caller said that his neighbor was yelling at his dog and possibly beating it. Police found that the dog was not injured.

May 18: 4:51 a.m. – A man sleeping in his semi-truck in the 16000 block of 72nd Avenue was awoken by what he thought was someone trying to steal the batteries in his truck. The hood was up and it looked like someone was tampering with the battery. It turns out that the suspect was trying to jump-start his own vehicle without getting permission. The caller ultimately agreed to provide a jump. And the suspect was warned against tampering with other people’s property. 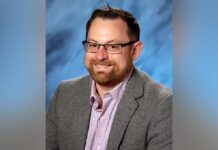 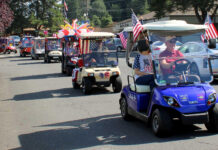 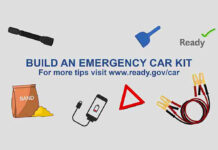 What is a First-Time Homebuyer Grant?