After the Tigard City Council in April 2022 approved a term-limit resolution for the mayor and city councilor positions, Jason Snider was not eligible to seek a second term as mayor, and then the dominoes started falling.

City Council President Heidi Lueb and Councilor John Goodhouse both decided to run for mayor. Per the city’s Charter, Lueb had to resign from her council seat to run, and Goodhouse was term-limited from running for a council seat again. Also, Councilor Liz Newton, who finished up her first four-year term in 2022, announced that she was not running for reelection.

That left three open council seats, with Jeanette Shaw the only remaining councilor going into 2023. In the November election, there were four candidates for two four-year terms and three candidates for one two-year term on the council.

Yi-Kang Hu and Jai Raj Singh won the two four-year positions, and Maureen Wolf won the two-year seat, making this the most diverse council in Tigard’s history following the first female-majority council in the city’s history.

All three talked to Tigard Life before they were sworn in on Jan. 3, and they were all excited about getting to work and serving together. “This City Council will be the most diverse City Council in the city’s history with two people of color, and it is more representative of the city’s population,” Hu said.

The councilors-elect all ran for office because they learned about the issues facing the city from their various community-service efforts and wanted to make a difference.

“I ran for City Council because I was involved in different community organizations, including political and policy advocacy groups,” said Singh, who just took a new job as a Climate and Health Program specialist senior for Multnomah County. “Some of my mentors and neighbors suggested I should run for office. I was inspired by them. I want to focus on policies to mitigate and decrease greenhouse gases. I am also concerned about the most vulnerable residents. As we acquire new buildings – public works, police, library and City Hall – I will be an advocate for the highest energy-efficiency standards.

“I moved to Tigard two-plus years ago because of its vision to be an equitable community that is walkable and accessible with a healthy environment. I want to create a new resilient Tigard with Tigard community members. They came to me and asked me to jump in. It was a combination of what’s inspiring me here and community members passionate to create a healthier community.”

Wolf, whose previous job experience included working in finance at Intel and serving as controller/project manager at E3, the Oregon Business Council’s education nonprofit, is best known for serving on the Tigard-Tualatin School Board for 12 years; she also served as president of the board and the Foundation for Tigard Tualatin Schools.

“I supported the (previous) City Council, and (Mayor) Jason (Snider) has done a wonderful job,” she said. “What struck me was that Jason couldn’t run again, John (Goodhouse) and Heidi (Lueb) were running for mayor, and Liz (Newton) was not running. I was encouraged by colleagues and friends to take my governing experience and run and hoped I would get the opportunity to continue. This was a great opportunity, and friends from the school district bond-measure campaigns supported me.”

Hu, who has lived in Tigard for 16 years, said, “I got a puppy and was walking the puppy. I live around Fowler Middle School where many streets have no sidewalks or shoulders. I joined the Planning Commission and the Transportation Advisory Committee at the same time to see what I could do to make more streets walkable and improve the transportation system. We need to fix them.

“There are ways streets can be designed to make them safer, which takes money and making them a priority. But there is not enough money – that’s why communication is important.”

He added, “The City Council was having a huge turnover with three of the councilors leaving. Being on the Planning Commission for seven years, including two years as president, I felt my experience working with city government would be an asset, so I thought I would step up.

“I never thought I would run. I turn 50 next year and have a job, and serving on the City Council would mean a whole new level of involvement. I have met a lot of different people and can’t wait to start my service.”

All three have similar views about the issues and problems the city is facing.

Wolf said, “I support the goals the City Council has set the last two years and the direction the city is headed. The biggest issues are houselessness, parks and recreation, and climate and becoming greener.

“When I canvassed voters, there were two things I heard: People don’t want Tigard to become Portland and the struggles it has as far as the violence and public safety issues. Dealing with houselessness was a priority of the (previous) City Council and city leadership, and it will continue to be a high level of concern. We want to keep the community safe.

“I want to develop more parks, create more walkable streets for families to have a walkable, livable city, and to insure adequate funding for city staff. People thought the city responds well to their needs for the most part. It’s important to track, communicate, share and ask how we are performing based on the goals we set.”

Hu said that during his campaign, he knocked on 2,000 doors. “I got a map from the city recorder and visited different neighborhoods every weekend and two or three times a week for 2 ½ months,” he said. “When I went door to door, all the people I talked to were very reasonable, and they understand Tigard has a low property tax base.

“People are mostly happy with the direction of the city, but they are concerned about houselessness and rising crime. They were happy and grateful that I showed up at their door. At least a handful said they would vote for me when I showed up and said I was running.

“The city wants to provide information, but some people think the city neglects them. At our Planning Commission public hearings, no one showed up, so there is a disconnect. People feel ignored, but they don’t get involved.”

Singh said, “I knocked on doors and made phone calls throughout my 2022 campaign for Tigard City Council. Caring for our houseless neighbors and improving pedestrian safety as well as housing affordability and stability were some of the top things I heard when communicating with my neighbors in Tigard. Addressing climate change locally and our mental health crisis are issues I heard particularly from younger folks.”

Wolf moved to Tigard in 1998 and is married to her husband Bryan. They have a son and daughter who are both college graduates. Wolf has a bachelor’s degree in accounting from Indiana University and a master’s degree in management from Purdue University; she became a certified public accountant and practiced as a CPA in Indiana but didn’t pursue becoming licensed after she moved to Oregon in 1993. She just started working for a nationwide company that assists school districts in their superintendent searches.

“I will likely focus on Oregon, but I might have to travel,” Wolf said. “My commitment is to attending City Council meetings and doing city work. I’m excited to support the city I care about.”

Hu, a practicing attorney, earned a bachelor’s degree from Reed College; a doctorate in biochemistry and molecular biology from Oregon Health & Sciences University; and a doctorate in jurisprudence from Lewis & Clark Law School. He has worked for 17 years in regulatory law for the Food and Drug Administration.

In addition to volunteering in city government, Hu’s other governmental experience includes the Oregon Long-Term Care Ombudsman program and the Oregon Board of Naturopathic Medicine. His community service includes previously serving on the Tigard Community Emergency Response Team, and he worked as a Legal Aid lawyer representing domestic violence victims. He is married to his husband Abram.

Singh grew up in Atlanta, Ga., and said he got interested in environmental issues because “a lot of my family members had health issues that could be tied to the environment.” He said he moved to Tigard in 2020 mainly to be closer to the Sikh Center of Oregon (on Scholls Ferry Road in Beaverton), adding, “I am not practicing, but I am involved and go to the center. I also moved to Tigard after living in various parts of Portland, where I worked with community-based organizations that were all based in Southeast Portland, to pursue my interest in the environment and get real-life experiences.”

Singh earned a bachelor’s degree in environmental studies from Emery University and a master’s in urban and regional planning from Portland State University. Most recently, he was the climate resilience and environmental director for Unite Oregon, and previously he was community outreach manager for the Asian Pacific Network of Oregon and a community organizer for OPAL (Organizing People Activating Leaders) Environmental Justice Oregon.

In Tigard, Singh was a Community Engagement committee member, and for the State of Oregon, he served on the Resilient Efficient Building Taskforce.

He has an older brother in Tigard and shares his home with two cats.

Hu told Tigard Life that he and the other two councilors-elect had been through “City Council Bootcamp” and met many city staff. “We are a brand-new City Council and will have the staff to lean on,” he said.

Want to learn more about the rest of the Tigard City Council?

Mayor Heidi Lueb was fearured in last month’s issue of Tigard Life. You can find that article online at tinyurl.com/rkcthdz4. Councilor Jeanette Shaw was elected to a 4-year term two years ago. You can learn more about Councilor Shaw at tinyurl.com/5698x9ra. 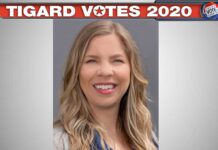