As quickly as it began, the Tigard High School football season saw its end.

Each fall sport saw its fair share of difficulties in lieu of the COVID-19 pandemic, but football had its own unique adversities to topple.

After finishing off last year’s season, seeded first in the state for 6A schools, the team graduated 13 all-league players. And this January, Tigard’s senior quarterback, Drew Carter, opted to graduate early to play both football and basketball at the University of Colorado Boulder.

Still, Tigard prepped as best as possible for their season-opener against last year’s championship finalist, Lake Oswego. But to add fire to the flame, that game was cancelled after several Lake Oswego athletes contracted COVID-19 from an out-of-school gathering, shortening their already condensed six-game season to five.

Nonetheless, after a long year without football, the Tigers marched onto the stadium field in their first matchup with the Oregon City Pioneers hungry to clash helmets.

With Tigard senior running back Hewitt Sullivan throwing down four scores, they took this long-awaited game as their own – a 34 – 16 victory.

But unlike last year, where the Tigers held a 10-1 season record, remaining undefeated until the second round of playoffs, this win would be one of few.

In matchups with West Linn, Lakeridge and rival Tualatin, the Tigers didn’t manage anything over 20 points and took three consecutive losses. However, with their first loss to Tualatin since 2015, Tigard wasn’t dissuaded – in fact, it only pushed them further to topple Clackamas in their final season game.

“Win one, lose three in a row, a lot of teams would have tossed it in, and (the Tigard football team) didn’t do it,” Tigard Assistant Coach Mike Fanger said.

So, it shouldn’t come as a surprise that on only Tigard’s second play of the game, Sullivan piped himself into gear for an immediate 45-yard touchdown. In this last game of his high school career, he was out to beat his previous four-score season record.

But, before he could get a move on, Clackamas answered back with a one-yard touchdown. With a successful PAT, the Cavaliers led 7 – 6.

Shortly thereafter, Tigard quarterback Zachary Chesler connected a 35-yard pass with Karon Boschma bringing the team to the Clackamas 28-yard line. The Tigers fumbled, however, losing possession. But their defense was tight. Clackamas was unable to gain much yardage, and with a fourth-down kick, Tigard started back on the opposing 36-yard line.

This set the stage for Tigard senior Spencer Kuffel, who, due to an injury, was unable to play his junior year. Chesler, guarded on all sides and seeing Kuffel in the distance, threw high. Kuffel neared the end line and was forced to fall back, keeping his heels in bounds to receive and take the lead, 13 – 7. This lead wouldn’t falter, and Sullivan took the wheel for the second quarter.

He started small with a score from the one-yard line, then kicked it up a notch with 47 seconds left in the first half.

On the Tigard 31-yard line, Sullivan took the handoff from Chesler and ran the distance. Dodging the first round of Clackamas linemen, he neared the sidelines. Boschma held back one Cavalier, but three more took his place. Tip-toeing the line, he outran one dive and then another until he finally completed his 69-yard run to make the score 25 – 14.

To make up for two lost field goals, Tigard opted for a two-point conversion with success.

But Sullivan’s reign still wasn’t finished. In the third quarter, he ran for both his fourth and fifth touchdown, breaking his season record and bringing the score to 41 – 21.

From here, the game was essentially at its end, but the Tigers wanted to seal the deal. Chesler on the Clackamas 33-yard line, finding Keenan Speer-Johnson, threw for the might of it. Speer-Johnson jumped back into the endzone to cradle the ball and finalize the score with a 19-point lead, 47 – 28.

“Seniors thank you very much, I know it wasn’t the year you wanted in regards to anything,” Tigard Head Coach John Kemper said in his post-game speech, “but to come out here one final time on this field and play like we did, that’s how this game is meant to be played, alright, together as one.”

This last win against the Cavaliers pushed Tigard to a 2-3 season record with Clackamas falling to 3-3.

With a young group of athletes, this Tigard team is far from seeing its end.

“Well, there’s a lot of potential, but potential can be a dangerous word,” Kemper told Tigard Life. “There is potential so we’re excited, but we got a long way to go still and these guys got to put in the work.” 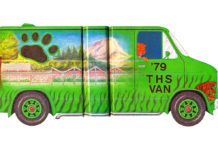 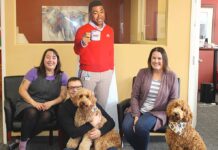