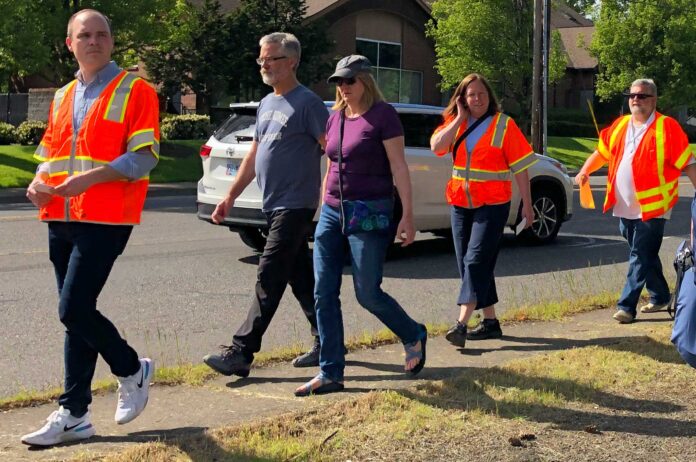 About 25 City and State officials, and members of the public mostly cladded in safety hazard vests walked along Hall Boulevard in Tigard to cite the many hazards and needed improvements along one of Washington County’s most dangerous stretches of road, on May 4th.

The scheduled late afternoon joint walk, which started at the Tigard Plaza on the corner of Highway 99W and Hall Blvd. progressed north to SW Locust Street, was sponsored by the City of Tigard and the Oregon Department of Transportation, is an area of increasing concern to many local residents regarding deteriorating road conditions and dangerous hazards for pedestrians, bicyclists, and motorists, says Kent Wyatt, City of Tigard Communications Manager.

“This road is not in great shape.  It’s been pretty neglected!  We have a lot of walkers and bikers, and it is very difficult for them.  Ultimately people want to feel safe,” says Wyatt.

For nearly two years City officials and ODOT have discussed a “jurisdictional transfer” of ownership of Hall Blvd. within the city of Tigard.   State and local officials are in favor of such a decision, but at this time City officials want to make sure the State first pays for necessary maintenance, safety and hazard improvements, and upgrades, which include ADA accessible crosswalks, before the Tigard would acquire the road.  Without help from the State such improvements would most likely mean additional financial commitments for the City of Tigard.

Hall Blvd. is currently a state-owned highway, which is designated as OR-141.

The proposed transfer of ownership to The City of Tigard from ODOT would include SW Hall Blvd., from SW Locust Street to SW Durham Road.  The areas of Hall Blvd. – from SW Locust to SW Scholls Ferry, would not be included in the transfer to Tigard because it is within a portion of unincorporated Washington County at this time.

Wyatt says at this time cost estimates for future operations and maintenance on Hall Blvd. are completely dependent upon the amount of money needed for repairs and upgrades as part of the jurisdictional transfer from ODOT, and because of this, it’s critical the roadway is brought up to a “state of good repair” prior to a transfer of ownership from ODOT to the City of Tigard.

The actual transfer of ownership would be funded through a combination of sources, primarily from the state and federal government, so at this time local tax increases are not being considered.  Funding allocations for the transfer haven’t yet been determined.  Wyatt adds, funding for the jurisdictional transfer and safety improvements will be determined through a community engagement process that Tigard will lead, starting this summer.

“It’s too early in the process to say with certainty what these costs will be; However, rather than increasing taxes, Tigard’s approach will be to balance operations and maintenance requirements on Hall across the entire system,” Wyatt says.

Throughout the years Hall Blvd. has transitioned from a main highway, preceding Interstate 217, to an urban road, with changing needs.  Wyatt adds that local ownership and control would allow the City of Tigard easier access to design, build, and make future roadway modifications that would best meet the current and future needs of the local community.

“The community should understand that Hall Boulevard is an asset that will take resources to maintain – resources that the state has not been willing to commit,” says Wyatt.   “The cost to maintain a facility in good condition is more affordable than repairing an asset that has failed.”

City of Tigard Mayor, Jason Snider, acknowledged the hazards, dangers, and horn-honking directed toward the group of walkers during the near mile long walk.

“How appreciative I am of ODOT to be here, and more importantly, that they got the full Hall Blvd. experience!  Today we had someone almost get hit as we were crossing Locust St.,” says Snider.  “The conditions on Hall Blvd., which include its high speeds, limited crossings, incomplete sidewalks, have all made travel on this corridor unsafe.  We’ve lost lives, including most recently Karen Kane in March, where her mother also suffered severe injury.”

Snider says while driving down Hall Blvd. most people experience the road’s neglect, but he envisions a road that serves the mobility needs of everyone in our community.  He says despite still having a lot of work ahead, todays walk is a significant milestone in the progress towards the city taking ownership of Hall Blvd.  Considering all the needed repairs and upgrades, Snider estimates total current construction pricing of this project would be between $50 and $60 million.

“To transfer Hall Blvd. to Tigard ownership. It needs to be brought up to a certain level to just meet the minimum standards.  Current construction pricing that’s a 50 to $60 million price tag.  Two or three years ago when we were starting the work, it was probably would be at $20 or $30 million,” says Snider.

Mark Freitag, ODOT Area Manager, says the condition of Hall Blvd. throughout the years has not received the needed attention because of the current system allocates funding based upon usage and prioritizing of a road.

“The challenge we also have is we only have so many maintenance funds to go around in the region,” says Freitag.  “We do have a prioritized list, but a lot of it is based upon usage.  While Hall Blvd. is an important highway, it is much less used than some of the other ones.”

“As the entire fleet of vehicles in Oregon becomes overall more fuel efficient, the amount of fuel purchased is going down (per driver).  Just buying gas historically was a very straightforward mechanism to capture funding to maintain the roadways. That is why we’re looking at congestion pricing – also known as Tolls — in certain localities,” says Freitag.

ODOT say such toll highways would be first introduced along certain sections of Interstate 205 and Interstate 5 — in the Portland Metro areas. 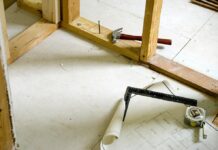 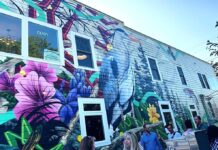 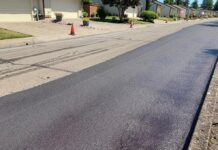 We Will Pull Through Together