What a difference three years make.

Jan Richardson and Janice Lathrop have been neighbors in Tigard for 30 years and knew each other casually as neighbors. Then several years ago they discovered a shared talent for art and are now good friends and have a joint display of their works at Frame Central in downtown Tigard.

“We call ourselves the ‘Two Jans,’ and we support, encourage and inspire each other as well as learn from each other,” Richardson said.

Lathrop became an artist almost by accident. Her sister Judi Weigandt is an award-winning artist and belongs to an artists’ group that goes to the beach for a week twice a year to paint and learn from each other. When Lathrop retired from 35 years with the federal government, her sister invited her to come along to the beach three years ago.

“My sister brought along a gelli paint plate for me to try,” Lathrop said of the acrylic paint that has the consistency and feel of jelly. She played around with it and loved the looks she could create by spreading many layers on paper, which led her to start creating paper collages and also making her own paper.

“Jan saw what I was doing and said, ‘You could sell this,’” Lathrop said. “I sold eight pieces at Tigard’s Art Walk this year. I sell them framed or matted or unmatted. Some of the things I do are happy accidents. And I never throw away paper, I paint over something I don’t like.”

Her techniques include cutting out pieces of painted paper and attaching them to the bigger piece, such as when she wants to create feathers on a bird.

Lathrop has also published a charming children’s book called “Tatertown’s Talent Show” that is illustrated by her sister. One day after she retired, she saw recipes for potatoes in a local newspaper.

“Tatertown” features a talent show for the town’s potato citizens, and when an onion named Un Yun wants to participate, the whole town learns a lesion about inclusion.

“There are three sequels to this book, and the publisher has the hard manuscript for the second book,” Lathrop said.

But she doesn’t have all the talent in this dynamic duo. Back in the 1970s, Richardson was inspired by a watercolor painting by Dorothy Hagerty, a family friend and well-known artist in the Pacific Northwest.

“I went to Fred Meyer in Albany, where I was living at the time, and bought some Prang watercolor paints and some inexpensive watercolor paper,” Richardson said. “I started experimenting with paint and paper, not really knowing what I was doing. I also took a watercolor class, and I actually sold a painting during that time.”

Then life took over, and painting took a back seat for a long time

“In 2018, I saw an ad for a free watercolor class at King City Senior Village and decided to give it a try,” Richardson said. “I met some great women and learned a lot.

“I just put the paint on the canvas and play with it. It’s fun, I can do a lot of different things, and I get ideas from Pinterest. I might use a brush or a pallet knife or a Squeegee to apply the paint.

“I mostly do abstract, and I don’t know what I’m creating when I start a piece. People see different things in art. I won’t see something, and someone else will see something I never thought of. You need to let the art create itself, and to me it’s all about color.” 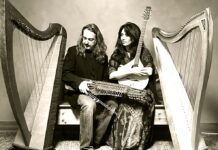 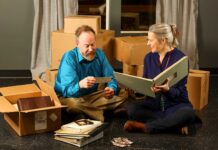 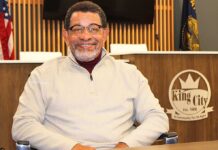 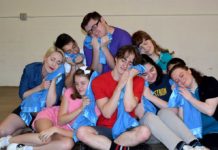 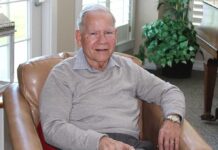